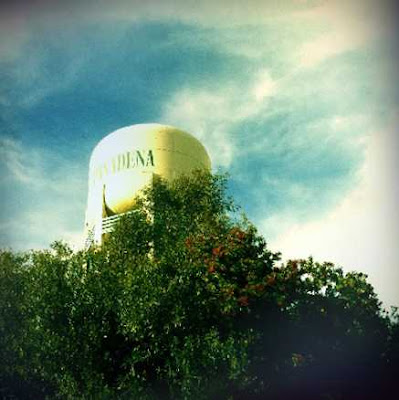 "I know a secret about that water tower," a little girl said. She was walking her dog past the familiar landmark just as I was taking this picture. "So," she said. "Wanna hear it?" "Sure," I said. "But do I have to keep it a secret, or can I tell other people about it?" "Oh, you can tell them," she said. "But they'll never believe it. Nobody does." She lowered her voice to an almost-whisper and opened her eyes wide. "There's a mermaid living in there," she said. "And she can't get back to the ocean because it's too far and she'll dry up. So that water tower is like her aquarium." The girl looked up at the water tower and paused for several seconds. "Sometimes if you listen carefully you can hear her singing," she said. "But it's usually during a full moon or something weird like that. Okay, bye!" The girl walked away with her dog and I stood very still for a moment and listened... Nothing. Oh well. I'll try again during a full moon.
Posted by Laurie Allee at 12:03:00 AM

That story is wonderful. You could write a children's book about it. I just love the imaginative take on a "plain ol' water tower."

Terrific pic too - with the vintage feel of an old camera.

What imaginative take? That story is true. The little girl thinks she's the only one who knows, but we all know.

I'm surprised to hear you don't know about the mermaid, Laurie. I thought everyone in South Pasadena knew about her.

I've heard the mermaids singing each to each. I do not think they sing to me...

I knew DB and Earl would verify this!

A SONG FROM THE MURMAIDS

this would, btw, explain why SoPas water tastes the way it does!

and if you listen quietly on a peaceful night, you can hear the mermaid splashing around up there.

Good shot, can you tell me where is the water tower located? Thank you TC