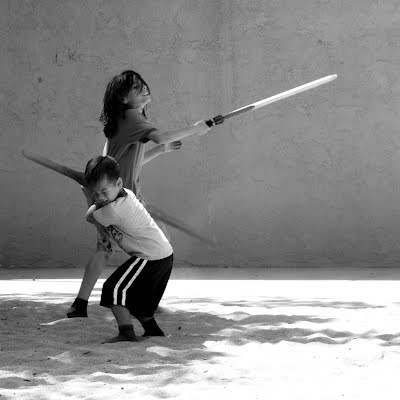 "Invincibility lies in the defence; the possibility of victory in the attack."
--Sun Tzu
Posted by Laurie Allee at 12:03:00 AM

Oh I love this. It has the human form mixed with geometry. Perfect in black and white. Their expressions are priceless. What a cool quote.

I love your street (or on this case playground) photography. Amazing eye for geometry as well as narrative within the scene. Wonderful.

Oh Laurie! This is fantastic. Look at the serious expressions!

Thanks, you guys! I was lucky to get a shot at all. These ninja warriors were lightening fast.

"Lightening fast"--that's what fast shutter speeds are for! Great shot.