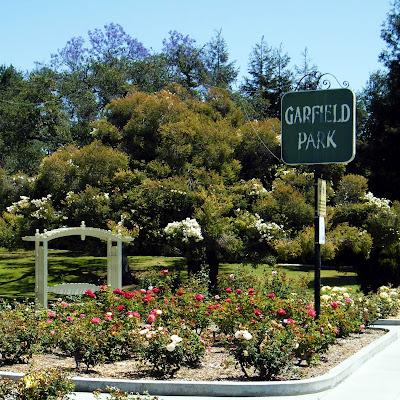 At the turn of the last century, before Garfield Park was a park, it was a brambly-wild patch of land owned by the Southern Pacific Railroad. South Pas leased the seven-acres for a number of years before finally purchasing it in 1920 and transforming it into the jewel in South Pasadena's crown. Even with a modern playground and tennis courts, Garfield Park feels a bit like a garden from a lost era. (All those old-fashioned rosebushes! That wonderful sign!) And although the park suffered significant tree loss from last year's windstorm, the place still beckons with plenty of shady spots to have a picnic or just take in the rolling hills, vintage streetlamps and chattering birds. (I'm particularly fond of that tree in the background, even though it's just about to burst into a giant white puffball and send me for the nearest bottle of allergy medicine. Ah, the price of beauty...) (Read about my favorite Garfield Park story from history. For more on South Pas parks, check out one of the first columns I wrote for Patch.)
Posted by Laurie Allee at 12:38:00 AM

Great post and links. Do you know if they are doing Shakespeare in the Park again this year?

I really like pergolas. Those white arches correspond with the white roses and contrast the pink and red ones. Every time I see it when I visit, it makes me think of another time. Nice that you have that in the midst of LA County!

This is a beautiful shot!

I use to play in this park all the time when I was a kid! It is such a beautiful park. A few yrs ago I took some pics of meaningful places to me in south pas and one of them was similar to your pic. I actually have a wall gallery on my stairs of my South Pas photos. I plan on posting them to my blog one of these days! :)