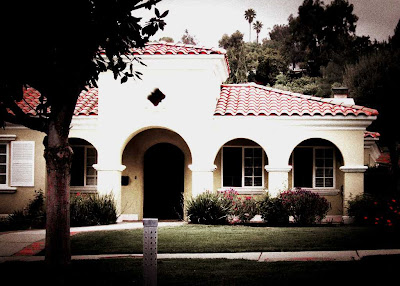 I once had a professor who insisted that some of the most haunting film noir scenes did not take place in shadowy alleys or low-rent bars, but rather in ordinary suburban settings that seemed innocuous on the surface, but hinted at something lurking below. Remember that insane carousel scene from Strangers on a Train? I had an entirely new view of amusement parks after seeing that film.
David Lynch's Blue Velvet probably cornered the market on creepiness beneath the picket fences of suburbia, but that film built on the foundation of the works of writers like James Cain and Raymond Chandler. To this day, I can't look at a happy Mayberry scene without imagining the way Chandler would have described it.
I remember being surprised to learn that Chandler lived in some truly white-bread neighborhoods in Los Angeles County. I always pictured him in a seedy walk-up in Hollywood, not a cozy little bungalow in Monrovia. But maybe he understood what my film professor was trying to say. Maybe he liked imagining potential darkness inside every sunny American dream.
(I think Chandler would have loved the iPhone MoreMono app. It turns everything into Marlowe's playground.)
Posted by Laurie Allee at 12:03:00 AM

The desaturation of color does elude to a less cheery side of this beautiful Spanish style home. The shadows seem a bit more foreboding. Thanks for the lesson!

The bad things happen in nice places concept was exactly what Alfred Hitchcock had in mind when he directed "Shadow Of A Doubt" with Joseph Cotten, where a murderer escaped to an innocent little community and tried to pull of being a long forgotten uncle of a family. Hitchcock decided on Santa Clara, California, but South Pasadena would fit the image as well.

Santa Clara is about as sleepy as SoPas...but there's more technology.

And that house used to be a rather boring and weird 70's creation, which turned into a Spanish looking place somehow. Walked past it every day on my way home from school. Drove past it last week again and did a double-take---looks too pretty to be the house that I grew up avoiding! Some of the scariest houses in the Altos are the most innocuous looking!

Used to be some damn good drugs floating around here in the 70s...

Oh, man. I may have to break down and finally upgrade to a smart phone, just to get this app.

I totally agree with your film professor. My American Gothic literature instructor stressed that those unsettling stories that get under our skin usually do so *because* of their seemingly ordinary settings. It taps into our deepest fears, that home is not safe and in fact houses the greatest threats to our safety and sanity.

This sentiment was echoed in the noir portion of my California literature class. Chandler, Cain, et al, definitely knew how to best tap into suburban dread and everyday anxieties.

You missed a great lecture at littlest in Pasadena. Judith Freeman who write the recent book The Long Embrace, outlining Chandlers domiciles was there. Her husband is the equally talented LA photographer Anthony Hernandez

Litfest <--- this Mac auto spell feature is the debil

I love it when u talk film, Laurie. Great post as always. Love the comments today too.

Thanks for the great conversation on this post, gang!

PA, I read The Long Embrace last year and was fascinated by the relationship with Cissy. Wish I'd seen Freeman's lecture because I thought the book was just excellent.

Kelly, American Gothic lit is sooooo noir! I would love to have actually taken a class on the genre. I love all that bubbling subtext of sinister underneath a shiny veneer.

Trish, the house is so bright yellow and happy in color, but I love it with this treatment. Amazing what a little mood lighting will do to a setting...