like a race of giants that have faded into mere mythology 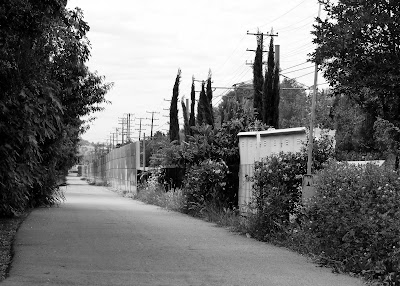 Telephone Poles
They have been with us a long time.
They will outlast the elms.
Our eyes, like the eyes of a savage sieving the trees
In his search for game,
Run through them. They blend along small-town streets
Like a race of giants that have faded into mere mythology.
Our eyes, washed clean of belief,
Lift incredulous to their fearsome crowns of bolts, trusses, struts, nuts, insulators, and such
Barnacles as compose
These weathered encrustations of electrical debris¬
Each a Gorgon’s head, which, seized right,
Could stun us to stone.
Yet they are ours. We made them.
See here, where the cleats of linemen
Have roughened a second bark
Onto the bald trunk. And these spikes
Have been driven sideways at intervals handy for human legs.
The Nature of our construction is in every way
A better fit than the Nature it displaces
What other tree can you climb where the birds’ twitter,
Unscrambled, is English? True, their thin shade is negligible,
But then again there is not that tragic autumnal
Casting-off of leaves to outface annually.
These giants are more constant than evergreens
By being never green.

I love this alley.

Pasadena has a (very) long term plan to remove all telephone poles.

I love those old telephone poles.

Another path, easment, right of way, shortcut and it rings a faint bell..

I love the melancholy vibe here. You should do a telephone pole series, Laurie.

I emailed you about a price list and the email bounced. Is there another one for you?

Sally, try again at yahoo. It must have been a glitch.