It's all in the View 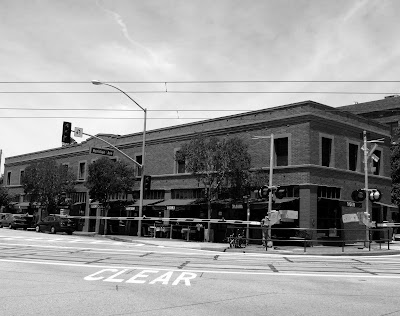 Long before this building was known for great Indian food and award winning cupcakes, it was the Mission Arroyo Hotel. Built in 1923, the ground floor was designated for shops, while the upper floor offered lodging. Back in the day, it advertised "New, modern, all outside rooms near streetcars and restaurants." The rate was $6 to $7 per week, depending on the view. I used to talk to an older gentleman who called himself Pal-- a longtime South Pasadena resident who liked to hang out in the shade near Mission Station. He lived in a room on the upper floor of the old Mission Hotel in the late 1940s, and apparently it was one of the rooms with a view. “When I was there, I was in love with Olivia,” he told me. “To this day, I look at that building, and I remember what she looked like walking by with the sunlight on her hair.” Now, every time I look at this old building I also think of Olivia and wonder if she married the right guy. ------------------------ Thanks to everyone who has asked about how Little Bit is feeling. The fever is still spiking high, but day by day our girl is feeling more like her old self. The poor baby has the flu on top of an upper respiratory infection. We told her that when she's all better, we're definitely going to Disneyland. We appreciate the good wishes, y'all, as well as the kind words from fellow parents who've been in the fever trenches. Keep those happy healing thoughts coming!
Posted by Laurie Allee at 12:03:00 AM

"walking by with the sunlight on her hair".... what a lovely visual!

With that quote, and our healing thoughts for Miss Bit, I thought THIS was more than appropriate.

wv: workers (I like it when mine is a real word )

Glad to hear Little Bit is weathering the tide of high fever! She's a tough little one!!! Hope you all stay healthy through this!!!

Oh dear! I've been visiting my parents and had no idea Miss Little Bit was so sick. Sending you all lots of healing wishes from San Diego!

This is my kind of post: history, romance, and good news.

I've had almost no internet access this week...still catching up.

I know the man, didn't remember his name. I never knew if he married Olivia or not, but he did tell of when the trains ran (back before they started running again). Used to watch me play softball at that park. He was there the day I hit an inside the park homerun...but that was a looooong time ago, I was only slightly older than little Bit.

Hope she's doing better and getting ready for Disneyland! Remember to take some hand wipes or sanitizer for your trip so there aren't any relapses!

I love this story.