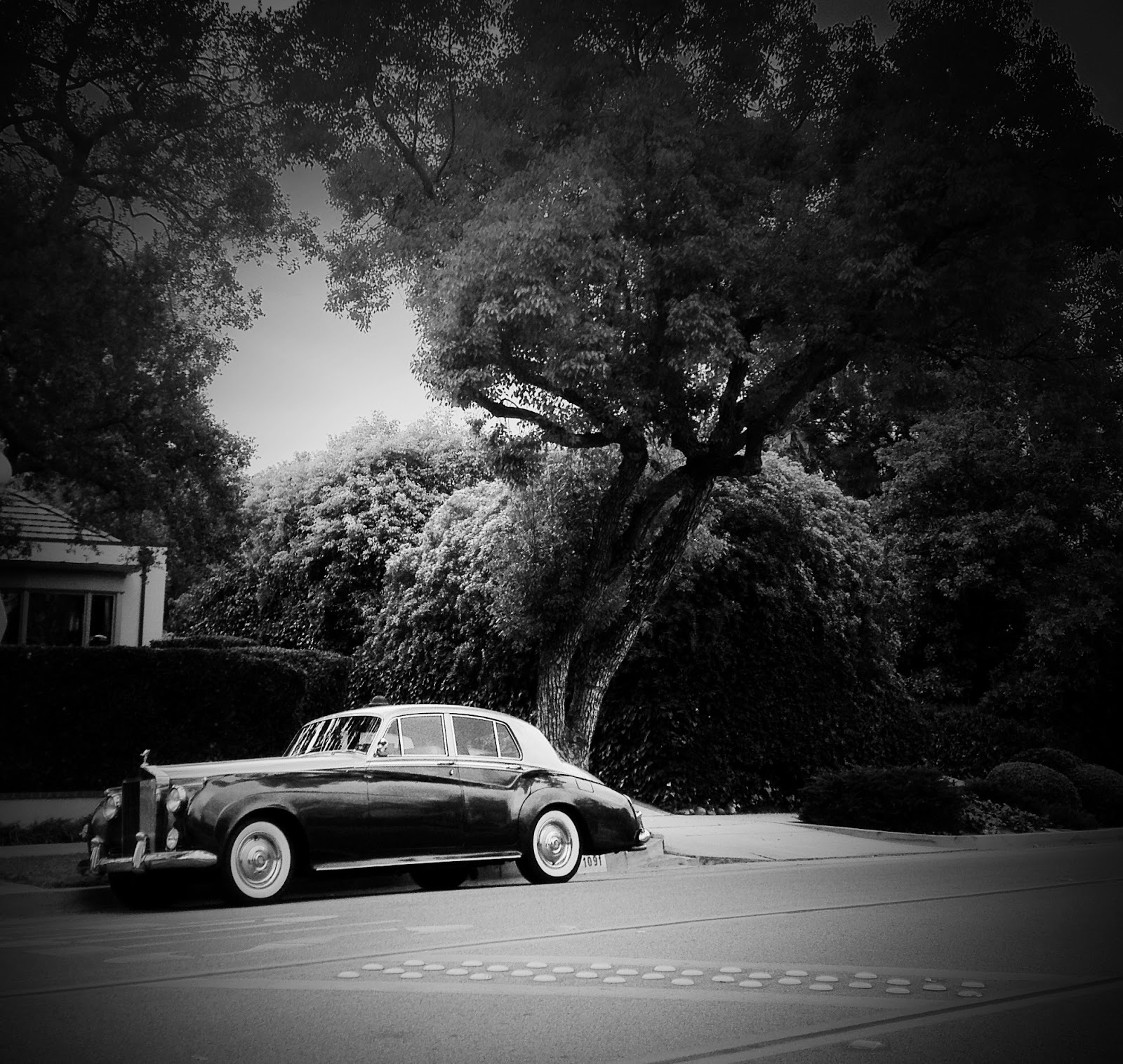 You guys know I can never resist an old car.  Don't believe me?  Just look at how many I've found:

Take a joyride with me through South Pas... and marvel at all the vintage cars.


South Pasadena was part of transportation history -- a destination for early rail as well as home to one of the first freeways.
Oh, and then there are the countless vintage cars...

Spend enough time in South Pasadena and you'll notice that the Rialto, the historic buildings and the classic craftsman houses aren't the only remaining treasures of our past.  This town has more than its fair share of vintage cars.  Hang out on Mission Street on a weekend afternoon, and you'll see a promenade of enough old roadsters, coupes and muscle cars to satisfy even the most persnickety car buff.  I'm not just talking about your standard issue American Graffiti-worthy hot rods, either.  I've spotted a late 30s Peugot 402 and a 1949 Hudson Commodore -- even a mysterious black sedan that two confounded car aficionados argued about while standing nearby.  (One insisted it was an unmarked 1939 Cadllac; the other swore it was a Citreon Traction Avant.)


It's not surprising that South Pasadena residents display so many examples of driving history.  Our city itself has always held a prominent spot in the changing landscape of Southern California transportation.  Back at the turn of the 20th Century, the horseless carriage was considered no more than an amusement created by eccentrics.  The future according to those in the know would not be paved with asphalt, but rather etched in rail.

In 1901, Henry Huntington incorporated the Pacific Electric Railway Company and began work on what would eventually develop into the largest interurban electric rail system in the world.  One of the main hubs was Oneonta Station, located at the corner of present-day Huntington Drive and Fair Oaks in South Pasadena.  This spot marked the junction of the Pasadena Short Line and the Monrovia Line -- two of the most important Big Red Car trolley routes.  Within a few decades, a huge network of trains and streetcars wound their way through Southern California connecting Los Angeles, Orange, San Bernadino and Riverside counties.  The system was hailed as the one to copy, and reporters all over the world began to refer to Los Angeles as a mecca of reliable public transportation.  South Pasadena was at the heart of it all.

But by the mid 1920s, those reliable trolleys had been upstaged by Henry Ford's mass-produced, reasonably-priced automobiles.  No longer a carnival curiosity or novelty, the personal car was becoming a viable means of transportation.  By the time the Model T was discontinued in 1927, Ford had sold some 15 million cars -- many to Southern California residents.  San Gabriel Valley contractors had a huge upsurge in business as local homeowners tore down carriage houses to build carports and garages.  The trolleys might have been efficient and dependable, but South Pasadena's mild climate tempted residents to put the top down and cruise around.

Although the Pennsylvania Turnpike had opened a few months earlier, many historians argue that the Arroyo Parkway was the first real commuter freeway.  Hailed at the time when motoring was marveled, the sleek, well-paved parkway offered South Pasadenans and neighboring residents the chance to open up their vehicles full-throttle and travel at top speeds.  Connecting downtown LA with Pasadena, the parkway was revolutionary because engineers had designed the gently curving road to accommodate modern speeds up to a dizzying 45 miles per hour.

The 110 we know today is almost identical to the one that beckoned South Pasadena car lovers over 70 years ago, with modern SUVs whipping over those 45 mph curves at speeds the original engineers would never have believed possible.  It is a National Scenic Byway, a National Civil Engineering Landmark and a State Scenic Highway.  If you sit at the overlook on Arroyo Drive and watch the traffic flow, you'll see a lot of vintage cars heading to and from South Pasadena.

Every September for the last few years, South Pasadena has put its love of classic cars on display by hosting the Cruz'n for Roses Car Show.  There, hundreds of local car owners from around the region have shown enough steel, chrome and shiny paint to make even the most jaded gearheads swoon.

South Pasadena clearly loves its old vehicles, but it still has its eyes on the future of transportation -- and not just because it's a prominent stop on the Metro Gold Line.  At a Cruz'N for Roses show a few years ago, I heard two guys talking about converting a classic Mercedes diesel engine to biofuel.  I'll bet they attended South Pasadena's annual Clean Air Car Show.  The event features examples of all kinds of next-generation technology vehicles from hydrogen-powered sports cars to electric city buses.

South Pasadena must have a reputation as a transportation-savvy, green-loving city because in 2011 Toyota picked our Farmer's Market as a stop on its Farm to Table Tour.  The event featured cuisine prepared by local chefs paired with regional farmers, and showcased Toyota's fleet of energy-efficient Priuses.

Whether you have a classic Model T or a brand new hybrid, South Pas is a great place to take your car for a spin.  Shift into low gear and wander around Monterey Hills for panoramic views along Alpha and Via Del Rey.  Curve along Arroyo Drive under the same canopy of trees that was there during the construction of nearby Arroyo Parkway.  Head east along Huntington Drive, and smile because while most of Los Angeles sits in gridlock, our thoroughfare moves along pretty smoothly -- even during rush hour.

There are plenty of destinations within a few minutes' drive from South Pas (Huntington Library and Gardens, Santa Anita Racetrack, the Rose Bowl) but that's not really the point, is it?  The original owners of those vintage cars discovered something that is still true today: when you're behind the wheel on the open road, it's not always about the destination.  Most of the fun is getting there.

Take a joyride with me in the video above, and drool over some of my favorite shots of the vintage rides I've spotted in South Pas.

Want to leave a message or say hi?  Click the Community tab at the top of the blog.

A version of this article was originally published in my former multimedia column at Patch.