A Treehugger's Paradise in South Pasadena

We all know that South Pasadena has a lot of gorgeous old-growth and heritage trees.  But did you know that our city is part of Tree City USA?  South Pas meets the program's four requirements:

1. A tree board or department

3. An annual community forestry budget of at least $2 per capita

Tree cities not only look better than their more sparse cousins, they enjoy things like better storm water management, energy savings and increased property values.  As an unabashed treehugger, I agree that these are all good things.  But I think I'd love trees even if they offered nothing of tangible value.  Come on... they're beautiful, lush trees! What more do you want?

Before you click on the above video compilation of South Pas trees, I am reminded of my very favorite South Pasadena tree story.  I've told this one before, but it's worth a repeat: 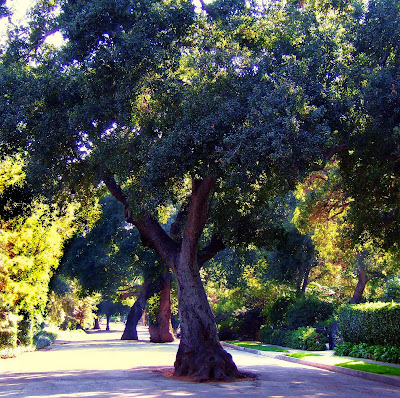 Yes, in South Pasadena, we love our trees so much we even let them grow in the street.

Many of you have probably noticed these lovely old oaks happily obstructing traffic in the middle of the private section of Chelton Way. But most of you probably don't know their controversial story...

Back in 1907, the area had been subdivided into what was known as the Ellersbie Park Tract by a wealthy woman named Carolyn Dobbins. She had spent a holiday at South Pasadena's posh Raymond Hotel. One day, while looking out over the expanse pastoral land surrounding the hotel, Mrs. Dobbins noticed the thicket of oak groves. She decided she was going to buy the parcel of land, leave her hometown of Philadelphia and move her family to South Pasadena to build a house in a paradise shaded by magnificent trees. The trees you see in this photograph are remnants of Mrs. Dobbins' dream landscape -- and designated as Cultural Heritage landmarks.

But that's not the best part of the story. Back in 1950, sweet, upstanding South Pasadena got a jump start on 1960s rebellion by fighting a spirited battle to save several of Mrs. Dobbins' other oak trees. The ones in question happened to be growing in the middle of Edgewood Drive. South Pasadena city government deemed the trees a "menace." The City Manager at the time called them a traffic hazard, "obstructions," with "no place in a modern community." The government wanted change. The residents wanted their trees, believing they were integral, valuable parts of South Pasadena. They wanted to keep them right where they were.

After heated City Council meetings, with passionate pleas made by numerous citizens, the council inexplicably made the decision to save two of the trees -- but cut down a third.

This is where things got interesting. One would think our kindly, rule-abiding townspeople would have accepted the compromise. Instead, when city workers showed up with their saws and a city ordinance granting permission to remove the hundred year old oak, they ran across a mob of angry townspeople. I am not sure if there were any pitchforks, but public record reported an automobile blockade, at least one snarling dog and a less-than-cordial group of men, women and children waving sticks, brooms and rolling pins.

"There is too much useless destruction going on in the world these days," one South Pas resident told a reporter for The Review. "...in a small way we're fighting for the same things our boys in Korea are fighting for. The maintenance of freedom and the carrying out of the wishes of the majority." Another anonymous resident wrote a letter to The Review in the form of a poem:

I think that I shall never see
A Council lovely as a tree.

The tree brings beauty to the town.
The Council orders it chopped down.

The writer concluded his Joyce Kilmer homage with this couplet:

Laws are made by men like these
But only God can make the trees.

The mid century treehuggers' story went 1950s viral -- gathering interest across the nation and symbolizing a group of ordinary people standing up against a government that didn't listen to its citizens. Telegrams and letters of support arrived from all over the country. "Save the trees!" They said. "Axe the City Council!"

After so much national coverage, the city government backed down and the trees were spared. While the beautiful old trees that stirred up such a debate eventually died of natural causes, their younger siblings on Chelton Way still thrive as reminders of South Pas heritage, preservation and, yes, proud symbols of ass-kicking rebellion. Right here in our polite little town.

Now, be sure to watch the video at the top of this post for a forest-worth of trees, all within the borders of South Pasadena.

For more on the great tree controversy, as well as other amazing stories about South Pasadena's past, you can't beat Jane Apostol's definitive South pas history book, South Pasadena 1888-1988 A Centennial History Second Edition with Chronology: 1988-2008. For more on Jane, you can take a look back at my interview with her from a few years ago.

Want to leave a message?  Head over to the Glimpses of South Pasadena Community Forum to start a conversation!
Posted by Laurie Allee at 12:31:00 PM