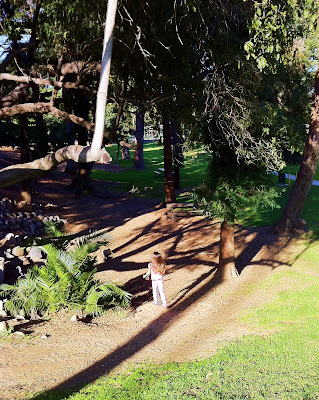 Back in 1912, Garfield Park was chosen as the location for a San Gabriel Valley Inter-City celebration. There were overflowing tables of free barbecue and a concert that may have started with genteel performances of Haydn and Handel but ended up with a rowdy, crowd-pleasing new number called the "Inter-City Quick Step." People from all over the region showed up to party under the trees in what appears to have been a Victorian version of one of Willie Nelson's Fourth of July picnics. Newspapers claimed that 4000 people were at the park, and that "at least 3999 were satisfied."

Maybe that one guy who didn't have a good time just needed to brush up on his quick step.

Here, Little Bit does her own version of the quick step at Garfield Park. (So quick, in fact, she almost got away from me while I took this shot.)
Posted by Laurie Allee at 12:03:00 AM

Very cool story. Where is that at Garfield?

One of my favorite parts of South Pas.

What an absolutely gorgeous picture!

am assuming you meant genteel performances? SoPas is pretty white bread, but...Mr Earl is proof they allow non-gentiles in the city.

only 3999? guess they forgot to count the guy who was counting people!

I do love seeing kids play at Garfield...one of my favorite things to do while in town---sit and watch the kids play as I did as a child.

wv: trock...well, the Star News confused my name once as "Truck"...yet another alteration!?

Trish, thank you for pointing out my typo. Damn you, autocorrect!!!!!!! Yes. Genteel.

lol...MSWord used to autocorrect the name of a board member of an org I used to run, to "Mr Algae"...while I had to agree, tho algae has a usefulness and this board member, not so much. It got out once or twice into meeting notes or other printed items and he was less than happy about it. Never have forgotten it.

thanks for the good giggle this morning!

Did the article about the 3,999 satisfied quick steppers include the line, "a good time was had by almost all"?

I love that story! What a weird report. I wonder who the lone cranky one was.

It appears that you climbed a tree to get this photo

hee hee - the quick step. As a Dancing with the Stars junky, I can just see the Victorians doing their version with the long dresses and high collars.

Great shadows here! I love to follow their lines.

A coworker showed me your blog. It is amazing! Thank you for these beautiful images and words about our city.