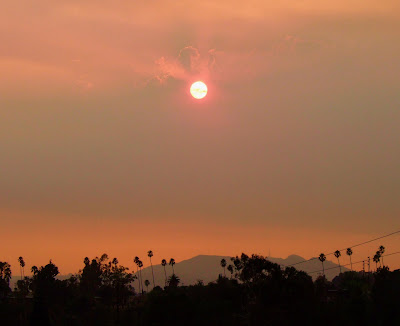 The good news? Finally, a number other than 5%. As I write this shortly after midnight, authorities claim the Station Fire is 22% contained. Sure, that could change on a dime, and a 120,000+ acre wildfire that is 78% uncontained is still terrifying, but we'll all take what we can get.

The bad news? Smoke. Smoke is EVERYWHERE. It permeates everything, even laundry in the dryer. It stretches out over Los Angeles like fog from a classic noir film. Radio stations reported people smelling the stuff as far away as Vegas.

But it's not just the smell of smoke that affects you, it's the way it changes the light. It's kind of like the light during a partial solar eclipse. If anyone has ever been in theatre, think of a half-dimmed spotlight with an amber gel.

This is the view from Arroyo Drive just before sunset yesterday. See what I mean?

For continuing fire coverage, be sure to check out these great sources:

UPDATE: 4:00PM We all want to help out during this crisis, but make sure the fund is legit. REad Atty Gen. Jerry Brown's news release about avoiding sham charities.

Mother Nature has given you a beautiful filter for the sun. The orange of the sky and haze of the sun is quite glorious. It's a shame that devastation accompanies it.

Good morning, Laurie. For some reason, I'm not smelling smoke. Maybe my nose doesn't work right, or maybe my house is well sealed.

The light is certainly unusual. Last night at dinner time, it seemed that the light outside was as if from a lamp with a yellow bulb. Definitely felt different.

The latest figure I've heard on KNX this morning for the Station Fire is 140,000, but the fire officials are saying that the fire no longer has the upper hand - it's a standoff right now, and they expect to gain more and more control in the coming days.

Human beings are so courageous and optimistic. Imagine facing the roaring, spark-spitting behemoth of this fire, and daring to fight it to extinction.

I mourn the losses of all who became the fire's victims. And I feel indebted to every firefighter who risked his or her life to save us...

until the next fire breathes its dragon breath.

Oh... and doesn't the sun in today's photo suggest the light at the end of the tunnel?

You and Petrea are on the same page today. Nice shot though.

That's the color all right. Then in the morning, it's a putty-pink-gray.

under a blood red sky...

The odd light affects my mood so much. I wonder if that's where they got the name for the "Twilight Zone"? I feel like I'm living in it.

The light coming through my dining room windows is orange. Like carrot orange. Definitely surreal.

How do you explain the sense of wonder and beauty of this image...the sun appears like a jewel balanced perfectly in the sky.

How do the firefighers plug on, day after day? I've helped here and there, but it seems very little. Still, you've got to know your limitations. Yesterday I saw the Wildlife Waystation needed 16 flatbed trucks, then I thought, no, I'm sure I've never met even one person who owned one. And I'm pretty sure I couldn't drive one, especially when loaded for bear.