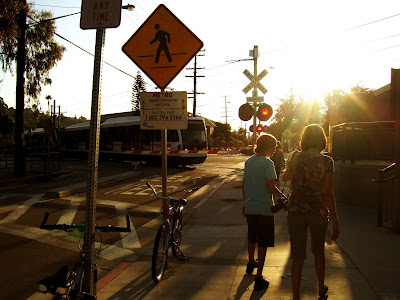 I love the way long shadows fall into burnished light this time of year. Astronomers and other science-minded types will explain that it has to do with the sun’s declination, but such a clinical exposition doesn’t identify the magic. It doesn’t adequately define the protracted shadows cast in golden light that creep into the landscape in the weeks before the air pulls a chill into its grasp. It’s the glow of late summer that highlights the clean slate of a new school year. Can you see it here?

It’s that special light in August.

And it reminds me of the Faulkner book of the same name , which seems appropriate to note during this remarkable time in our history. In the novel, that golden light in August was a metaphor for a newborn child -- the "light" of the new generation that was not tainted by the prejudice, racism, and hatred of the past. As we go into the presidential election, let us marvel at our own light in August: for the first time we have a candidate who half a century ago would not have been allowed to sit at the front of a bus, much less at the helm of a political party; a candidate almost bested by a party rival who, a mere 88 years ago, would not have been allowed to vote much less run for office. I'm not talking about the politics. This isn’t about Left vs. Right. I'm talking about the progress. This is about Light vs. Darkness.

Here’s to a new generation lighting the way out of our limited and prejudiced past.

To the author of this blog,I appreciate your effort in this topic.

I do hope he makes it and I do hope you are not disappointed when it turns out that he cannot fix all the problems that folk want him to fix.

I do like this photo and the narrative. It is nice to look at and great to read.

"... for the first time we have a candidate who half a century ago would not have been ... allowed to vote much less run for office."

Very true, Laurie. I think it's ironic that there seems to be an undertone to Hillary Clinton's campaign that says, "We didn't quite break through the glass ceiling but we almost did," which seems to ignore that perhaps an even thicker ceiling has been broken.

I love the result of the photo. The light
the shadows and the exacting placement of
the characters and objects. I know it's not
but it takes on a commercial set shot. I think
it's great. Your words are even more lovely.
Your commentary is as lovely as the photo.

Great photo and I love you commentary. We have made progress, but still have a long way to go. Thanks again for a great site.

Take a bow. That was beautifully written. Your photo is exceptional as well. THe lighting is perfect.

In your photo, the red light that stops us is trumped by the higher light of a starburst sun. It symbolizes that we can surpass our limitations. Thank you for your poetic expression of a day, a season and an era.

I'm a big fan of the long mellow rays of late August. I enjoyed your post too and agree with you all the way..

Soap box Wednesday! You and Petrea are on fire today.

My professor was just sharing that her African American daughters now feel as if they can dream of being president, just as most of us white males have done for years - without realizing how privileged of a dream that really is.

This photo aso represents a multimodal transportation in south Pasadena: walking, cycling, and metro (I said this as a transportation engnieering student). ;)

Yes. The burnished light and the long shadows of the late afternoon (or early morning) are a wonderful thing to explore photographically.

Never mind about the clinical explanation. It's the feel that's important. ANd you caputured it well in this picture.

An exciting time. Very nice summation of what is a tremendously hopeful period. Your photograph is evocative of the entire proceedings.

That fabulous California light. It just doesn't look like that here in the east.

A fine capture of the best of both worlds, between the 2 extremes of color & no color (b/w).
The result - a golden balance.

Is that lookin west from Busters?

I always like a sunburst in a photo! I'm always doing it!

Welcome Kris, tut-tut, webradio, lotto and double d! It's great to have you here.

I appreciate everyone's comments on this blog -- especially when I go off on some kind of sentimental tangent. You all make it so satisfying and fun to be a blogger.

Ken, I agree. Nobody has ever been able to explain to me why the light here is more golden than anywhere else in the world. I guess Cali really is a natural blonde...

Mike, nope, not Busters -- I was walking West on El Centro.

Yak Pate, thanks for picking up on the sun-trumps-stoplight symbolism. Sometimes I think I can be a little corny with things like that but then again I AM a little corny!

Wonderful conversation, people. I thank you all.

This is why I favor the month of September over all other months. The long shadows, crisp morning air, glorious colors, a of bit romantic time. This is why I enjoy autumn.

We live in a blessed time. I echo what Julie said; I hope Mr. Obama wins, and I hope we can forgive him when we discover he's not a miracle worker but a man. There's never been a president who didn't disappoint, even A. Lincoln and JFK, because we each want different things and we all expect so much. But he will do great work.

California light. It's one thing that drew the early filmmakers here. Magic.

The photo is beautiful, and the post was really, really well done. You are right about us being one mind, although your side of our brain clearly has a better command of the language!

Dusty, I share your love of Autumn. My husband and I got married in October -- my favorite month of the year.

Petrea, I like the way you think. YOU are one of the things that makes California glow!

Kelly -- aw shucks. Thank you for such a nice compliment.

You guys are terrific.

Your Light vs Dark left me speechless.

(I have horrible posture)

I mentioned this on Kelly's post, but to me we have a had a woman in power,in the UK but to have someone who not white as a candidate is awesome.

Ah, the magic light of early Autumn. Truly, eye candy and you, in your California setting, captured it so splendidly.