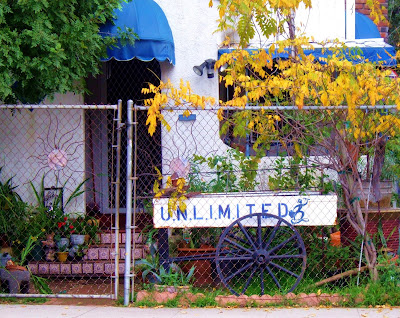 Unlimited. That's a great word, isn't it? I'm not sure exactly what this odd little wagon is trying to tell us, but the hopeful message is the same one I get whenever I volunteer for Little Bit's school parties.

Last week, a crowd of soggy, cold parents stood out in a soggy, school courtyard to hear a chorus of five year olds sing "Jingle Bells" and "The Dreidel Song." After the concert, fueled by cupcakes and juice boxes, the future class of '23 was more than happy to chit chat.

You can learn a lot from those kindergartners.

"We've had a lot of work with all that reading and stuff," Philip said through a mouthful of frosting. "I'm looking forward to relaxing over the winter break. People don't take enough time to just kick back and enjoy life."

"That's a good point," I said. "I don't think I take enough time to just kick back."

"Oh, you've gotta do it." Philip said. "Just relaxing and having fun, that's the best thing ever."

"I don't want to relax," Kate said. "I want to run around the yard so fast for so long that I fall down and can't get up!"

"I'm going to bake cookies over the winter break," Little Bit said. "I might even be a baker when I grow up."

"I'm going to be an inventor." Philip said.

"Can you share any of your ideas for inventions?" I said.

"I think instead of just animal cookies, there should be landscape cookies. You know, trees and mountains and stuff. I could invent that and make, like, a thousand dollars!"

"I'm going to be a runner." Kate said. "In the Olympics. Or maybe an ice skater."

"I'm going to be an ice skater, too!" Little Bit said.

"Ah, you guys can be skaters." Philip said. I'm going to invent rocket skates so that you can ice skate in the sky. You know, you could actually ice skate in snow clouds. That's the coolest idea I ever had."

There's a common thread to conversations among five year olds. It's a golden, sparkly thread of possibility. Those little ones are woven so securely with hope and potential, they haven't gotten even the slightest bit frayed by life. Or maybe they are just smart enough not to have been unraveled by the propaganda we all believe to be true: that we somehow have to compromise. That there are limitations. Maybe we've all been stuck settling for only animal cookies when we could have had the entire universe on a plate, if we'd just let ourselves imagine it.
Posted by Laurie Allee at 12:03:00 AM

Email ThisBlogThis!Share to TwitterShare to FacebookShare to Pinterest
Labels: little details, stuff to think about, text

I like the photo quite a bit Sweetie. Unlimited demands my attention, but what I'd really like to know about is what's hiding in the dark doorway.

We can all take lessons from these five year olds. The possibilities are UNLIMITED!

Awwww! Nice story, Laurie. This is a topic I've thought about quite a bit. One of the most powerful messages I received on this subject was from a certain band from Liverpool, who seemed to have no doubt that anything was possible.

I do wonder at the chain-link fence surrounding the unlimited. Already a lesson in irony.

I know what you mean. There's a silver line for us old ones: you're never too old to start up with something new and crazy.

Vanda...we've been doing just that for the past six months...dropping everything down south and moving up here to Snow, er, God's Country!!!

I found your blog through the Pasadena Star News article. You really deserve the Image Award. I've just spent over an hour reading back through your posts. It's like a novel/memoir with great photos. Thanks for leaving this beautiful chronology of life in our town in our times.

I'm still chuckling. That was great! Thanks. I needed that.

I still have a card that Judy sent push-pinned to wall above my desk. On the inside is printed: "Everything is possible".

"Do it again!" The conversation among the kindergartners was so freewheeling and fast! What fun there is in imagining

I feel that way about getting older, do something you love and do it again!

I want some of those rocket skates!! It's even something Mythbusters would have fun with!

How marvelous! My sons went to daycare right in that building. That was around twenty years ago. I've got to add my congratulations and thanks too. I found Glimpses originally because every single time I googled something I love in South Pasadena, your blog popped up.

When my kids were young - maybe 7 and 9, we'd play Pictionary. They routinely kicked their mother and my butts. Their minds weren't filled with so much stuff, and their simple drawings were so crystal clear, if not artistic, and they would get the answer much quicker.

Wonderful story. If we'd just stop and listen to the conversations of five year old children, we can be amused, inspired, and enlightened.