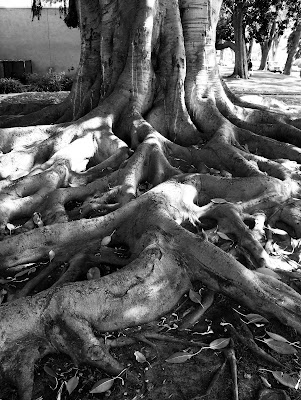 Today is the first of the month, and that means Theme Day for participating City Daily Photobloggers. This month's theme is Time.

I was this close to posting a really fun image of a Route 66 sign that was made into a clock. I found it recently at Fair Oaks Pharmacy. It's kitschy and fun, and a nice way to fool myself into thinking that the days aren't really passing by in their inevitable march to, well, something that isn't very kitschy or fun. But I realized that I was being rather uninventive, as well as wrapping up something obnoxiously existential and depressing in a rather syrupy and sarcastic little bow.

And then I remembered this tree. It's the legacy Morton Bay fig tree that dwarfs our historic library building. I love to sit there, perched on one of the roots like a wood nymph. The grand old tree has been growing for who knows how many years, spreading those roots out so far underground it's as if the entire city is being hugged by it. It has survived earthquakes, and wars, root rot and fungus, re-zoning laws and citizens who, believe it or not, at one point wanted to chop it down. If any one thing gets a solid A+ on the test of time, it's this tree. It reminds me not of the ineffable brevity of our lives, but of the gorgeous longevity of life itself. This tree doesn't have an opinion on Newton's version of time sequence vs. Kant's insistence that time is not even an event and can't possibly be measured. This tree hasn't pondered time travel's psychedelic world of possibility, where time itself is some sort of cosmic filmstrip and we can move forward and reverse if we can just sort out how to build a remote control to make it work.

This tree just is. And has been. For a very, very long time.

For other interpretations of today's theme, check out the work of a growing worldwide group of talented photobloggers. Click here to view thumbnails for all participants
Posted by Laurie Allee at 12:03:00 AM

Nice composition with the roots of this tree. Very nice with this b&w post treatment

Sometimes just being is the best we can do! I love its gnarled roots. Very Middle Earth!!

Here's a song that starts with Time.

Speaking of Time, Laurie and I discovered last night on Patch, that we both starred in the same play in high school. It was "Oh Dad, Poor Dad, Mama's Hung You in the Closet and I'm Feelin' So Sad." I played the male lead, Jonathan, in 1966. Laurie played the female lead, Jonathan's mother, Madame Rosepettle. I don't know the year and I'm not going to ask her to reveal it. Is this a wild coincidence or what?

We discovered this because South Pas High is doing a production of "Daddy's Dyin' (Who's Got the WIll?)" starting this week.

Lurie: Have you noticed the dual nature of your current comments avatar photo? It's a side profile of your head, but it also looks to me like a female Disney character leaning out a window, looking with anticipation at something bright and magical. The light off your bangs is the character's face. The light off the right side of your hair is the right arm, part of the left arm is your nose, and the light off the left side of your hair is the front of her legs and thighs. That's what I always see when I look at the photo.

Mister E, did you rediscover your hookah dolly? :-) I'll have to really study my avatar pic now to figure out what you are seeing there.

Definitely one of my favorite spots around tree. The tree is an adventure for little ones.

Lovely pic and essay, Laurie. You bet we're on the same page.

I must revisit this magnificent tree. It has a partner on South Grand in Pasadena. Laurie, I agree with everything you've written about trees. They've seen so much from their stationary spot while the world changes around them, and have such stories to tell - and then some man comes along with a chainsaw and it's all gone in an instant.

Two Pasa-bloggers post trees for the theme of time??? What are the chances?

Great minds think alike, Laurie. I tinted my image and made it somewhat more abstact by cropping the trunk of the tree.

Another symbol of the charm of So Pas!!! And Judy...it's definitely right out of Middle Earth!!!

The rolling roots remind me of waves.

This is one of LB's favorite places. We can't go to the library without at least 3 races around the roots, usually starting from the "path" that connects to the sidewalk.

It's a beauty. The only other Morton to rival it is the one in Santa Barbara.

Laurie,
I was born in Pasadena, grew up in Austin, and never stopped loving trees (thanks for the wonderful photo)! Beyond these odd coincidences, I also happened to put together a blog entry about time in Paris (where I live), shortly before the theme day. In passing, I wanted to share it with you :
http://www.paris-sharing.com/blog-en/paris-clocks/
I'm not a photographer, just an American in love with Paris.

Carsten, welcome! I loved your Paris clocks and would have left a comment if your comment section was not closed. Pasadena, Austin, Paris... pretty cool journey through some great cities.

Thanks for the kind words!

BTW, thank you, everyone!