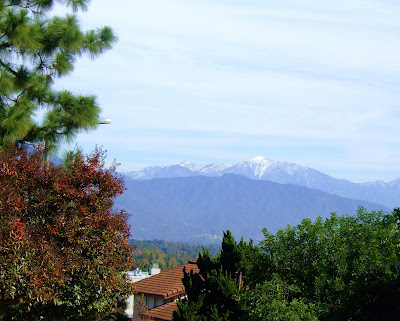 ....but you've seen something very close to this photo before. Although I haven't counted, I've probably taken at least two dozen other pictures from this very spot.

Or vice versa. But both places will be cold. Don't forget the wetsuit for the water.

What??? You're excited about that little bit of snow??? Says the die-hard Southern Californian who moved to snow country...

Ok...I'll give you this...we may have more snow...but it takes us about 8 hours to drive to the beach...so no surfing in the morning for us!!!

@Chieftess...that's why surfers get up REAL early in the morning! ;-)

I love being able to surf and ski in the same day if I so choose---always have. Though, I was I think 3 or 4 before I ever was actually IN snow in those mtns.

And, is the house @~7oclock from that location still putting up alternating red and white lights on the railings around the house? So simple, but beautiful at the top of the hill.

And, you can have dinner while on a patio overlooking over the desert. Of course, we can be standing in snow while looking down on the high desert and Crowley Lake.

I do the same thing -- get giddy when I see the snow up there. But that's as far as I go. I don't ever want to be up in it. I'll never make a good snow bunny!

So interesting to see snow on these hills. We did a house exchange with a family from La Canada, and had a view of mountains from their house.

LInda, it gets better in a few weeks. This is just the first little frosting!

I don't think I'll ever get over the thrill of living so close to ocean AND mountains. I grew up landlocked in Austin, Texas that -- although hilly and lovely -- didn't have this kind of dramatic landscape.