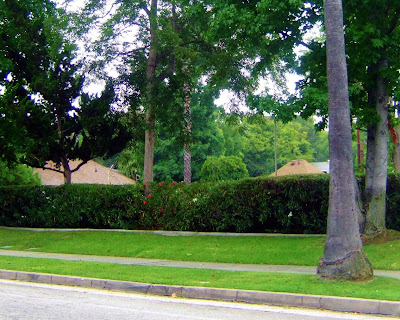 When cinephiles trek to South Pasadena in search of William Holden's childhood home, they're often befuddled. Census records list 1911 Fletcher Avenue as the residence of 11 year old William Beedle -- Holden's name before Paramount Pictures changed it. (The rent for the Fletcher Avenue home was $62.50 a month. The census report also made note that the house had a radio.) But at some point 1911 Fletcher Avenue was consumed by the parking lot behind Huntington Cleaners, now bordered by this lovely hedge.

In 1921 three year old William Beedle moved with his family from O'Fallon, Illinois to South Pasadena. His mother taught school in neighboring Monrovia. His father was a chemist with Gooch Industries. The family was pleased that sleepy, respectable South Pasadena was aligned with their Midwestern values and seemed light years away from the wild, outrageous antics of nearby Hollywood.

But after Billy Beedle graduated from South Pasadena High School he began inching closer to the fast lane. He performed in radio plays at Pasadena Junior College (merged in 1954 with John Muir College to become Pasadena City College.) He got his big break playing the part of an 80 year old man in a play at The Playbox -- a small theater owned by the director of Pasadena Playhouse. A Paramount talent scout spotted him and offered him a contract. His mother was happy about her son's career but begged him to "date only South Pasadena girls" because she thought they weren't corrupted like those poor souls in the movie business. What's a mother to do!? (We can only guess what Mrs. Beedle eventually thought of this scene from Picnic.)
Posted by Laurie Allee at 12:06:00 AM

Is that is mother up on the balcony?

I mean his mother.

No wonder the Baptists don't want their youth to dance! HAHA Wow - what a great scene. I always loved the dresses of that period with their gathered skirts and the slingback sandals!

William Holden- what a great bit of history.

What a great story -- I loved this. (WH started out rather dishy, didn't he? Over the long haul, I suspect his mom was right.)

Ah, no good can come of this. Dancing is a gateway drug.

well, you KNOW what dancing leads to!

Hysterical Lucy clip, Karin, as is the restaurant scene that leads up to it!

the "picnic" scene... the direction of that scene is gorgeous. Makes me wonder if it's Arthur Wong who was the cinematographer

What a treasure trove of stories in your little South Pasadena!!! I love the scene in Picnic, and the Lucy clip is one of the best ever!!!

I believe, back in the days the Beedle family moved to So Pas, it was a dry town...and very much the conservative little enclave Mrs Beedle was seeking!!!

My father and Bill Beedle were close friends through high school. They even got "arrested" together due to a childhood prank. Have my father's high school yearbook signed by Bill Beedle. My dad remained friends with his mother Mary after his tragic death in Santa Monica.