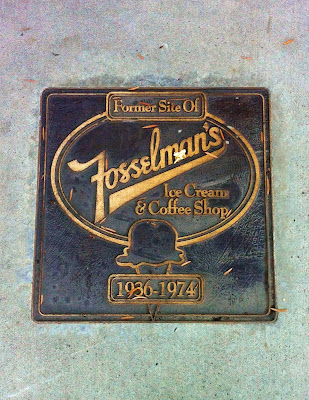 If you walk along the south side of Mission, you'll notice this unassuming little marker for a former South Pasadena ice cream parlor. For almost forty years, Fosselman's served up homemade frozen treats in the historical Ong Building, on the corner of Mission and Fair Oaks across from Fair Oaks Pharmacy.
When the lovely glazed-brick building opened in 1911, it was hailed as the pride of the South Pas merchant community -- noted for being the largest, most opulent business structure in town. Although the building served as an address for institutions as diverse as South Pasadena Savings bank and Chaffee's Basket Grocery, one of the most beloved tenants was Fosselman's Ice Cream and Coffee Shop.
When Fosselman's opened its doors in 1937, Depression-weary South Pas residents could treat themselves to a double dipped cone for only a nickel. (Those who wanted to splurge could order a large malt for a dime.) For decades, San Gabriel Valley ice cream lovers flocked to the South Pas shop for frozen confefections made by hand.
In 1974, the Ong Building was demolished, giving way to the unremarkable bank building that still stands.
(Today we can enjoy the legendary yumminess of Fosselman's ice cream -- still made with love by the Fosselman family -- at Busters or at the Fosselman's store in Alhambra.
Posted by Laurie Allee at 12:08:00 AM

The south west corner of Fair Oaks and Mission?

AWW I want that place to still be open.

I had no idea!

and actually, they had a store right near Cappy's Liquors for a little while too but details of that in my mind are just a little past sketchy. almost 40 years later.

As I recall, more than a few people were rather ticked that they moved to Alhambra instead of staying within SoPas. But that was during a rather tenacious (when isn't it?) time in town where building anything was anything but easy.

Can't tell you how many punch mixes my mother used for wedding receptions and such in the 70's. A frozen box of sherbet, a bottle of 7UP, bingo, punch!

That property went to building a bank, if I recall correctly. The Security Pacific Bank moved kitty corner across the intersection (to whit there were huge arguments, of course in SoPas about), which gave way to several other banks as SecPac got bought out, turned over and moved on).

Sure do miss them!

I haven't been back to South Pas in about 16 years. So tell me, is Thrifty Drug Store gone? And their ice creme gone too? I have so many happy memories of taking my kids to the park near by and then going for chocolate brownie ice creme. Breaking my heart a little bit here, Laurie.

Thrifty Drugs is now Rite Aid, but it's essentially the same store, and yes, they still have the ice cream, although the prices are much higher! Still have fudge brownie!

What was Crown Books has been empty for a long time, as is the place that was Curves gym, I think. The only other business there is a seafood restaurant, Fanta Sea Grill, which seems to be doing well.

I'm going to look on the bright side and be glad we at least still have the ice cream!

Patricia---the "old" Thrifty's is loooong, looong gone---the blue tiled store with a door facing the intersection of FO & Mission. Mr Earl's comments are right and the short walk to Garfield is still a nice place to hang out with your kids or grandkids.

The blue-tiled store was a Security Pacific bank, I thought, then a furniture store, before it was restored to Comerica Bank. The original Thrifty of over 30 years ago was where OSH is now.

Mr Earl---go back, waaay back. South of SecPac used to be a blue tiled (small tile) Thrifty's at street level on the SE corner. One door faced the intersection of FO and Mission. They demo'd the entire building to create the RiteAid/Crown Books debacle. Mmm, guessing 1974?

Thanks, Trish. Way before my time. But wasn't there a Thrifty where OSH is now?

Mr Earl---I believe there was a Thrifty's in the OSH location while they tore the old store down at Mission and built that big, brown blah (now Rite Aid). After that, there was an Ole's (exactly like OSH, but 35 years ago) till a firefighter from Glendale set it on fire what, 20 years ago?

and, if we're going waaaaaay back, OSH used to be part of the Raymond Hotel property, almost all the way down to the said Thrifty's at Mission & FO. ;-)

and, ironically, the Starbucks/FedEx etc on that corner of OSH used to be a gas station...don't complain if your coffee tastes like sludge...

Heh. I remember some cheap second story apartments above that Thifty or whatever it was. (Memory is getting hazy.) A buddy of mine lived there for a spell and I hung out with him there for an evening over some beers trying to figure out what the hell we were going to do with our lives.

Trish I believe the old Thrifty was tore down early 80's time frame - leaving opportunity for me to hang out in the apartments with my pals.

Fosselman's got up and left South Pas just as my family moved in. I remember walking by the store seeing that soda fountain counter and biding my time till I set aside some cash to enjoy something there. But the town was changing fast back then (and to my reckoning not for the better) and I didn't get the opportunity.

And I don't recall the Alhambra store as being anything to write home about compared to the homey counter in South Pas. Garish colors. A few plastic-looking chairs and tables. High ceiling with too bright fluorescent lighting. Larger for sure to accommodate a higher volume of foot traffic. But nothing you'd really want to remember like the South Pas store.

The ice cream was good. I'll give them that.

It was before my time here, but I've heard about it from my dad. Wish I could have seen it.

I know it's kind of crazy to hope I'll get an answer to this at this late date in this aging thread but I'm trying to remember the name of the independent stationery store on Fair Oaks across the street a bit caddy-corner south of the Thriftys/Rite Aid next door the bank which was a B of A. Geez I should remember - it was practically a South Pas institution now lost in gale force winds of big box storedom.

Ok I'm looking at Google Maps now.. It's a comfort footwear store now it seems... Hmmm. The tv repair place I believe was there back in my day. Someone confirm that. That's a comfort..

And while I'm at it I remember when I first moved in to South Pas, an independent clothier across the street where the brown rite aid blah is now but close to El Centro. I remember going in to that store to buy something for school. Maybe something to do with junior high graduation. Please help me old timers whose memory is in much better shape!

Arguing Guy... Swans Stationary used to be there.

Don/t know if anyone from the original stream about Fosselman's will see this. . .My name is Molly Swan, of the Swan Stationers on Fair Oaks. My grandparents and parents owned the store and my dad finally closed it in 1995, when we couldn't compete anymore with the box stores, as noted in an earlier post.
Someone was asking about the clothier across from our store. Maybe it was "The Toggery"? Unruh's Shoes, a five-and-dime, and a grocery store (El Rancho?) were there too.

It feels good that people remember our store.

I miss Fosselman's too. I remember walking up the alley behind our store with my dad and having lunch at the counter. Also miss their black-and-tan sundaes. Anybody remember those?
Mms715@icloud.com

Thanks for commenting! Where was Swan Stationers located on Fair Oaks? I'd love to do a post about it.

Swan's was at 921 Fair Oaks, where Lucha's Comfort Shoes is now. Originally, the store was down on Mission Street. The Red Shoes is in one of three storefronts. The other two were directly to the east. Swan's started in the middle of the three and gradually took over the stores on either side.

Arguing guy...Hahaha I lived in those cheap apartments when I was a kid. I found it to be particularly creepy at night. Anyway, my dad worked at The Toggery as a tailor. I remember they sold mostly suits, probably because that's what my dad altered the most. Lol. There was also another clothing store called Le Pore, which may have been what you visited.

Hi Molly, my dad worked at The Toggery (914) across your grandparents'/parents store and we lived in the apartments next door. I have a picture of my dad where you can see the reflection of the store and sign :)

My parents were Fosselman’s fans. I think my dad would occasionally eat their Moron’s Delight. I wish they had taken us there when we were kids, alas, but we left So Pas for Laguna in 1963 so Baskin-Robbins was outr ice cream hang there. So many memories - The Toggery, Jurgensen’s, and Taco Treat for takeout. And Bullock’s Pasadena.