Remnants of the Raymond 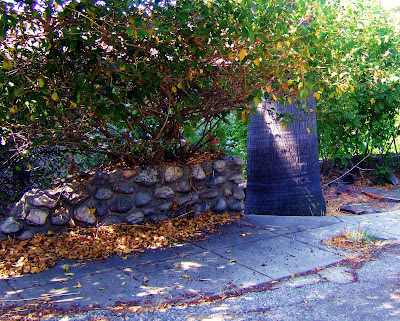 If you drive around Raymond Hill today you might not notice this broken bit of river rock wall lining several of the streets. The quiet stretch of stone is all that remains of the world famous Raymond Hotel. At the turn of the last century wealthy patrons were shuttled to their grand hilltop accommodations via an elaborate underground subway tunnel and elevator -- the only hotel entrance of its kind in America. After checking out the posh digs, the guests could admire the 19 foot ceilings of the dining room, play golf or hike around the Raymond's extensive garden pathways. If they made it to this stone wall they could survey the vast flower fields which grew around the base of the property. Those flowers added to the Raymond's cachet. The hotel was hyped around the world as a floral "paradise on earth", with fresh cut flowers placed daily around the hotel and in all the rooms -- even during winter months.

I always look to see if there is an errant poppy or snapdragon blooming near the wall now -- more subtle reminders of what was once there.
Posted by Laurie Allee at 12:30:00 AM

I love how the stone wall, pavement and tree trunk have a purplish shade in your photo.

What happened to the hotel? It sounds like it was a magnificent place.

Wow, that's really interesting information, I didn't know about the tunnel. And I love that piece of wall - one of the few remnants of the past that haven't been totally erased.

Next time I'm in the area, I'm looking for your river rock.

The restaurant The Raymond, at the base of the rise, used to be the caretaker's cottage, I believe.

I love the information you gave. The tunnel part is particularly interesting to me. You are quite the historian :)

AH---if you want river rock---go out the 210 a bit before it hits the 215...you should see plenty of river rock out there! All pretty much the same thing---all crated in from local "streams" back when they flowed more.

And you are correct I believe---the Raymond Restaurant was the cottage---caretakers and when the hotel failed, Walter Raymond moved into it with his wife.

Amazing to me the restaurant is still there---it had some shaky beginnings but I do recall some delightful food.

Thanks for this! I had no idea there was ever a hotel up there.. much less one with it's own subway and elevator entrance. There are so many amazing little pieces of history dotted around South Pas... and it always seems like they're marked somehow with just this kind of enigmatic bit of river rock.

I didn't know this much of a trace remained. Now I have to go see it for myself.

Rick Thomas has a marvelous book on The Raymond. You can find it here. In fact, all of Rick's books on the region are fascinating -- each with its own treasure of old photos.

Oh, and you're absolutely right about The Raymond Restaurant at the base of the hill being the former caretaker's cottage. Here's a bit about the history from the restaurant website. I haven't eaten there in years but it was divine the last time I was there.

I'm afraid the snapdragons went the way of the Garvanza bean. I do love those apartments on the north facing slope of the hill

tis a bit ironic---most folks who lived up on Raymond Hill in the last 40 years or so were considered "slumming" in SoPas...yet the hotel was grand.

local history is something I think every kid in SoPas should have to learn about (or any locale). then again, with great blogs like this, who need publikstrin edukashun?

Just wanted to help out those who wanted to read about the Raymond Restaurant--Laurie, your link was missing "about": it should be: http://www.theraymond.com/about/history.html

slopoet off in Connecticut (raining today!)