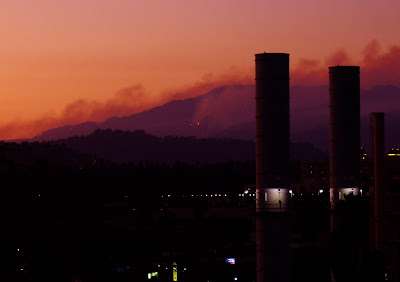 The Station Fire rages on, but it appears to be moving more toward Acton and Sunland. (And right toward the telecommunications towers and historic observatory on Mount Wilson.) While I am glad not to see as many mountainside bonfires from South Pasadena's vantage point, I know the 42,000+ acre inferno is very much out of control, en route to ravage more chaparral and forest, and poised to terrorize more towns. Two firefighters lost their lives yesterday in a vehicle crash. Tonight, 6600 homes in the region are under mandatory evacuation. The slightest increase in wind could churn this disaster into a real catastrophe.

But there is far less smoke in South Pasadena tonight, and our beautiful neighboring cities of Pasadena and Altadena seem -- at least for now -- to be out of the direct line of (literal) fire that threatened for the past few days. I'm grateful ... but not quite relaxed yet.

Check out my overflow blog for a few more images from yesterday.

UPDATE: 8:45AM Fire doubled in size overnight to 85,000 acres. Hard to believe it is growing this fast and out of control with no Santa Ana winds pushing it. It is still only 5% contained, but at least superscooper planes have arrived to assist in the fight.

UPDATE: 10:15AM While South Pasadena and Pasadena may not be in the direct line of fire, we are suffering from "very unhealthy" air quality due to the smoke/particulate matter generated by the Station Fire. Here is the latest map from AQMD. Stay indoors, folks.

UPDATE: 1:30PM Just got back from running errands around the area. There is a dreadful amount of smoke in the air. The mountains have virtually disappeared. A thick haze hangs over everything -- kind of like the air in a Holiday Inn bar at a 1955 Tobacco Council convention. I was over near Hastings Ranch and the smoke seemed even thicker there but it's pervasive and noxious everywhere you go in the San Gabriel Valley. Here's the latest about Mount Wilson. Don't know if fire has actually hit but the webcam is down. (That could be to increased traffic.) Altadenablog has the latest on evacuations.

UPDATE: 9:24 Mount Wilson still stands for now, fire still grows bigger -- latest from LA Times. The air in South Pasadena and Pasadena is better tonight than it was during the day. Winds must have shifted.
Posted by Laurie Allee at 12:27:00 AM

Poignant beauty created by such a terrible situation.

The lives lost just breaks my heart. I have such a sense of gratitude and admiration for firefighters. I always have. I wonder if anyone is setting up a fund for their families. Keep me posted

I hear that La Canada is not in the direct line any more either. WHEW - my friend's parents did NOT have to evacuate.

I haven't noticed a lack of TV coverage, but to the degree there is, it might result in part from inability to fly news helicopters into the area due to so much firefighting air traffic as well as so much smoke.

I was in La Canada at Ocean View last night, and the fire seemed to be going strong just above the houses. There was a line of fire heading east over La Canada, and there was fire west of JPL heading toward Mt. Wilson. Apparently, the fire can shift at any time.

Because the Mt. Wilson communications equipment is so critical to the LA media and government agencies, I'm wondering why it has not been made more secure against fire. If you had equipment like that in a burn area, wouldn't you surround it with concrete and wouldn't you secure it with water cannons etc?

Good point, Mr. Earl. Now that you mention it, that seems like a newsworthy topic in itself. I hope it will come to the attention of authorities BEFORE we sustain a Hurricane Katrina-type catastrophe.

Under whose jurisdiction is the Station Fire, i.e., in what county or counties is it located?

Glad to hear the smoke is lessening now. Oddly enough, this morning is the worst by far here. Not sure why, too much smoke covering the mountains to see what's going on. Be safe.

A few years ago, the people who run the observatory protested that all the wood up there was a huge fire risk, and the forest service (or was it LA County? I forget) eventually cut some of it back, but it was still a beautiful, shady, oak and pine-filled site that won't stand a chance with this low humidity and the fire all round. It will be a real shame to lose the historic wooden structures. Hope the Super Scoopers will fly today!

I've been thinking the same thing about MtWilson, Mr E. To me it's hardly secure at all.

I'm stunned at this thing. Doubled in size overnight, moving as if Santa Anas were pushing it. The direction could change on a dime.

Mount Wilson worries me. Not only are the telecommunications towers the ones that serve West Coast media, cell phones, some law enforcement and emergency services, etc., but that century old observatory is such an important part of astronomy. I really wonder why it hasn't been protected more.

Fantastic image Laurie, thanks for the continued updates!

134 square miles burning or burned, they say in the LATimes. Mount Wilson still threatened but fire receding and fire crews instructed to withdraw this morning. http://www.mtwilson.edu/fire.php has regular updates on Mt. Wilson

Laurie... Do you know Under whose jurisdiction the Station Fire is located, i.e., in what county or counties?

Yak, I don't know. Everything I read talks about LA County Fire and the Forestry people but as far as actual oversight, I'm not sure. Anyone else know?

I'll bet you could find this out over at Altadenablog, LA Observed or Firefighterblog. Check my links in this post.

Laurie, your photos are uncanny as they chronicle the fires and all of the accompanying devastation. I am personally glad for any optimistic views and news of your friends. And to know that you and yours are alright is good to know. Take good care and stay inside as much as possible.

Great work, photos. It certainly helps to get as much info as possible in one place.

I hesitate to say so, but... the color and composition make this photo beautiful, even though depicting an unfolding tragedy. And those two towers... Eerily reminiscent of a September day not so long ago. Impressive work, Laurie.

I used to live right on the property line of the Angeles National Forest in Altadena. I started several posts to respond to your photos over the last two days, but each became either too self-absorbed or too oriented to the drama.

What's left after that is that your photos are raw and gorgeous, as usual, Laurie.

And what Yak said.

Thanks so much, you guys. I can't tell you how much I appreciate the kind words about these photos.

There doesn't seem to be much to report tonight from our side of things. I was out about two hours ago and the blaze still rages with terrible beauty as a backdrop for city lights. The only difference in each night is the shifting position of the burn areas.

Mount Wilson appears to still stand tonight. There have been so many rumors flying around about it.

I'm happy to say the air is quite breathable this evening in our little hamlet, for whatever reason.

wow, looks like Krakatoa. Scary photos. Are you allright?