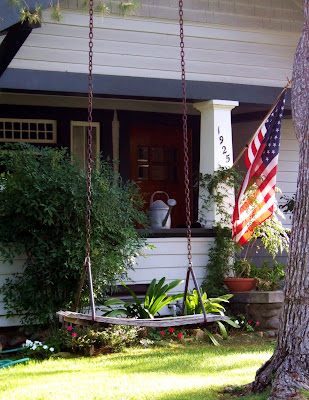 It's election day. Once again, in this basically half blue/half red nation, our presidential race depends on the ever-mysterious, somewhat capricious swing voters. And once again --just like we've been told in virtually every other presidential race prior to this one --we are told that this is the most important presidential race of our lifetime.

Regardless of our own particular blue, red or purple hue, I think we can all agree that it will be nice for the current occupants of 1600 Pennsylvania Avenue to pack up and GET OUT. Whether our new president turns out to be the thoughtful Constitutional scholar who inspired a movement or the intense former soldier intent on bipartisan reform, we can celebrate the fact that each of us is endowed with the right to cast a vote and be counted. (Diebold machines notwithstanding...)

While the presidential race has dominated the news, I am actually more interested in the local races and measures on ballots all over the country. Despite the spin, I find most of the final stage presidential candidates in our current duopoly to be far more similar than different -- regardless of party. But as a lifetime political junkie and activist, I see so much potential on the state and local level. New faces are emerging in Congressional and local positions. Initiatives and propositions have been introduced that can greatly affect the lives of millions. Sure, the Obama/McCain show has all the star power and grabs the big headlines-- but quietly, behind the scenes, local elections can make a difference on so many levels in cities all over the country -- and in the future legislation passed by our Congress. I'm inspired by those who work so tirelessly to better their own communities and represent their neighbors. Equally, I'm horrified at the small-mindedness of some who work just as hard to hurl boulders into the river of real progress.

But mostly, I'm just honored and proud to be an American today, and be able to join in the process of my country's government. It's flawed, and sometimes corrupt, and all too often removed from the ideals behind the phrase "We the People." But it's also inspirational and revolutionary and made even better when we all participate in it.

Get out and vote, everybody. And regardless of who wins, here's to a more perfect union.
Posted by Laurie Allee at 12:13:00 AM

I'm with you, my sister.
And one vote I'm sure to cast is for happier chickens and other farm animals. Bless their hearts.

Nice photo Laurie...
I am agree with You for :
"Get out and vote, everybody. And regardless of who wins, here's to a more perfect union."

All the world is watching you today...waiting to know who will be the winner.....

I totally agree (here's to a more perfect union).

This image conjures up the small town parade with the queen on the back of a flat bed truck, waving at the passersby who are lining the streets. 1925 is especially poignant to me as well, like maybe that is when this photo was taken. The composition is excellent, with the swing naturally framing the water pail on the front porch railing. The depth of field is great too.

Happy Election Day! I voted early, so I'll just sit back and watch returns, switching channels every 4.5 seconds, for fear I'm missing something on another network. :~)

WEll said my friend!!! An important day for America and the world.

Yay! I voted!!! Although not sure if it counts for much here in Mississippi...

I - and many others like me in Indonesia and many other parts of the world - am axiously waiting for the results of your elections.

Believe it or not, Laurie, it's being broadcast in special programs called "US elections" in two of our national televisions.

Hilarious! I love it.

I don't think I've ever seen an election day like this one. There are so many people voting. What an astounding turnout. It's got to be a record-breaker. I wondered if we were all still sleeping-or if anyone really cared. It's so obvious that people do care a great deal-they just were doing other things like living, etc. Maybe this marks a change in mass apathy. Maybe we can all get more involved in our local politics, too.

There is hope. You can see it today!

Hey Mom!
L, like you, I'm not satisfied to say the least with these 2 choices. I guess it's just the lesser of 2 compromises. But, let's support whoever "wins" in the hope that he helps us all a little to be a winner in life. I wish you had run for this office - you woulda gotten my vote.

This is a relatively long post for you. You must be in your politico mode - that Fuji can do it all!

Laurie
That was beautifully written. shhhh (you guys are all so positive). Not me, I've been up half the night and I'm on my third pot of coffee. I should not be left alone. Your last sentence was comforting to me.

John and I just got back from voting. I've always loved voting but this was the first time I've ever felt so excited, so thrilled to participate in this process. I've never before realized how our votes impact the world.

I seem to be repeating myself but as I've said on many a blog tonight, I am humbled by the high turn out. Too much voter apathy in the UK. Petrea is spot on the world's eyes are on America tonight to do the right thing- Obama. I think at half the UK will be up late tonight. Gary and I will be, me watching and him working on both Candidates cartoons for the BBC. Excellent post. History will be made today.

That really was very well written, Laurie. I was inspired when I first read it at 1:00 a. m. to light a white candle and then meditate, or whatever it is that I do. I was up half the night. I think it was that "a more perfect union" that really got to me.

As the returns come in, I keep thinking of the song Mr. Blue:

And I mean blue in a good way!!

Me too, Mr. Earl. I painted my share of brush strokes today.

This must be the song you are thinking of? Tom Brokaw is the hardest person to understand..ughggagrahha..

Why yes, Miss H, the Garth Brooks version of Mr. Blue is just great. The Fleetwoods had the most famous version of the rock era. And I believe there were some older versions.

What a day! Even I (a skeptical longtime armchair lefty politico prone to playing devil's advocate and fairly immune to campaign rhetoric)was moved to tears by the transformational and historic moment of President-elect Obama's win. Wow. Just, wow.

I was also greatly moved by Senator McCain's generous concession speech -- a gracious display of good will that I think should be recognized by everyone.

Mostly, I was overwhelmed by the TV coverage of all the exuberant faces celebrating all over the world. After a grueling campaign season of mudslinging and spin, love was definitely in the air. And it was right-out-of-a-Frank-Capra-movie fabulous. What makes me the most excited about politics is the heartfelt good will and passion of the people who support the candidates -- on both sides. I wish we could bottle that energy.