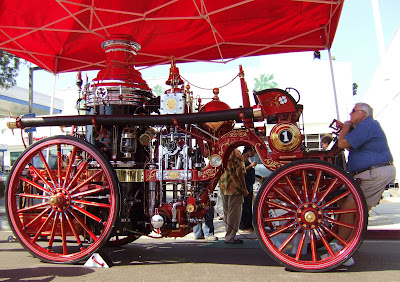 I snapped this photo in September at the South Pasadena Cruz'n for Roses Classic Car Show. Back in the mid 19th Century, steam-powered fire engines like this were lauded as high tech marvels of the day.

No offense to this old beauty but I'm glad we've made progress in fighting fires.

Today, area firefighters continue their grueling and heroic work as much of Southern California burns. The fires extend over 34 square miles since breaking out on Thursday -- from Los Angeles County to the east in Riverside and Orange counties, and northwest in Santa Barbara County. Over 1000 homes have been destroyed, and more residents are being asked to evacuate despite calming winds.

The Pasadena Marathon was canceled due to poor air quality -- but "poor" doesn't begin to describe it. The nearby San Gabriel Mountain range that usually provides Pasadena and South Pas with such a beautiful backdrop was rendered invisible by a veil of thick smoke and ash. This is the first time in the 20 years I've lived in Los Angeles that the air was actually too bad to stay outside.

The Los Angeles Red Cross is already assisting victims, and Goodwill Southern California is coordinating donations of food, clothing, and other necessities. Meanwhile, we all watch, and worry, and wait, and hope for no wind and lots of rain.
Posted by Laurie Allee at 12:06:00 AM

I heard the fires are bad now and may get worse. Times have changed a lot and this steamer is way out of date when one thinks about airplanes fighting fires.

It is an excellent photo.

A great photo and the timing of it is perfect. My mom was telling me about the fires you are having up there.
We missed the big fires in San Diego a few years back, had already moved but I couldn't believe the reports my mom would give me. Unreal.
Hope they get those fires out soon.

Great shot, Laurie. Glad to hear you and your family are ok; those fires look horrible.

I've been watching the news stories about the devastating fires. The amount of damage is unbelievable. I hope you continue to stay safe.

She's a beauty! (But what is that man trying to do?)

Your California fires are just so awful! I see the pictures, but I still have a very hard time imagining what it would be like — for both the residents and the firemen. I'm glad you and your family are safe, and I pray it stays that way. I also hope that the fires get stopped soon — the destruction now and during this past year has been too horrendous already. Stay safe, Laurie.

The SoCal fires are generally the lead story on the news here. This event is clearly very serious with many homes destroyed.

Lots of shiny stuff on the fire engine but it really needs the horses and the Dalmatian to set it off.

Several times in my life I have woken to the TV showing fire and the commentator saying "LA is on fire". Rivers of fire after the Northridge quake was the one that really startled me. But the last few days have made me sit up to look and see if I recognize the bits that are on fire as well. Some yes, some not so much. I cannot imagine the air quality being out of the ordinarily so bad as to cancel the Marathon! Wow. A bit of rain would help a lot. I do hope the fire folks can get an upper hand on it soon.

The guy on the rig---is sitting backwards on the T-bar that sits between the driver and the horses
(or, more to the point SHOULD be where they are). If he stayed there he might just get kicked in the head. Agreed there ought to at least be a Dalmatian somewhere on the rig!

What a wonderful photo of this machine. Very appropriate timing indeed in posting this photo considering what is happening on the west-coast!!

Was this machine anything other than a pretty face? Looks impossibly ineffectual.

What a grand show of an old and historic artifact, Laurie! Is it still running?

Thank you for your conern, Laurie. The earthquake took place in the northern part of Indonesia, about 4,000 kilometers from Bandung. I'm all right, but yes, I'm also concerned with my fellow countrymen and women who are affected by the disaster. Thankfully there's no tsunami.

We have made progress in the workings of fire engines, but I wonder if we still take as much pride in the building of them.

A beautiful shot of the red, gold, and silver shine, and well chosen for the situation. It sounds like the hopes for gentler winds has been fulfilled. These things can happen to any of us at any time.

THis automobile is BEAUTIFUL !

Speaking of fires, I was in Sylmar visiting a friend Sunday morning and I took this photo.

Seems like things were better today. Our air was better, the fires were more contained, the winds had died down. It's not over, though.

Bad air quality used to be an everyday occurrence when I was growing up here in the 1970s. Recess would be canceled and we'd have to play chess or listen to the radio in our classrooms. The air is much better but the fires still rage-they did back then, too.

Miss H sends her thanks for your thoughtful comments on the bloag.

I meant....stay inside during the bad air days.

Beautiful picture of a beautiful old fire engine. But I would like to see how it works and what kind of fires it would put out. I bet she looks pretty in a parade. Rescues from tall windows must have been impossible. No ladders. We can thank modern advanced technology for some fine firetrucks these days.

You have the world worrying about your safety and all the thousands of others. Stay inside.

My love to you, your family and the family of firemen. And I mustn't forget those planes spraying from the air. That's progress.

Let's all do a rain dance.

It was definitely better -- air-wise, at least -- today. It's amazing how bad the last few years fire seasons have been. It seems to be moving in tandem with the worsening of hurricanes.

Let's all keep hoping for calm days and rain storms. And lets also send out good thoughts to Indonesia and all those affected by the earthquake. Eki, I'm so glad to know you are safe.

Love and hugs all around. Til tomorrow...