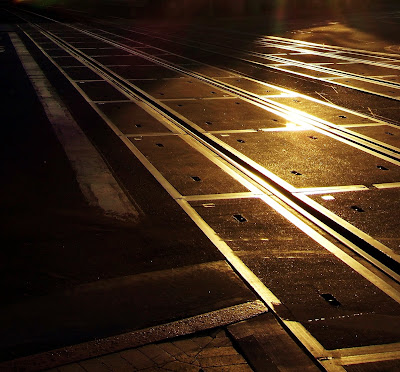 In an age of countless forms of visual enhancements that frost the real with a sugar-candy illusion (High def CGI, Photoshop, "reality" TV, Botox, plastic surgery, infotainment, the nightly news...) I'm drawn to the concept of lomography. Its genesis is somewhere in the many snapshots taken with the lowly 35mm LOMO LC-A Compact Automat Camera, produced by former Russian state-run optics manufacturer LOMO PLC of Saint Petersburg. Lomography's motto of "Don't think, just shoot" is the flipside of everything you ever learned in photography class. No need for image stabilization and polarizing filters -- just wave your camera and start clicking. It's the same kind of happy, spontaneous, unencumbered philosophy that inspired the French New Wave film movement, challenged artists to think outside of the purely representational and fueled free-thinking novelists to sidestep the rules established by the canon.

I know, I know... a lot of this is just a viral advertising scheme to get everyone who bought an expensive Canon digital SLR to throw down more bucks for a weird, low-tech camera. But let's take away the marketing tricks and just look at the idea...

Like here, for instance. Why had I never noticed the abstract beauty of the train tracks crossing Mission at Meridian in the late afternoon?

(Hat tip to my fellow Los Angeles photoblogger Kevin at The Jimsonweed Gazette for the inspiration to think -- and shoot -- outside the box.)
Posted by Laurie Allee at 12:40:00 AM

That turned out absolutely beautiful!

I loved reading your post! This is a great shot - the light is beautiful!

I was knocked out by the color and spontaneity of this before I read of your interest in lomography. I wish I had the time to write more - thanks for the plug.

Oversaturated colours, off kilter images, 'don't think, just shoot'........I've been a Lomographer all my life and I didn't even know it.

How do you find out about all this stuff Laurie?

The color is excellent as is this compsition. DId you do this digitally? Would like to learn your approach to this way of shooting.

Lomography is an intriguing idea. One that I wish to try , however digitally. My co-0worker just bought a fisheye lomo camera quite a unique wa to shoot.

I was drawn to your photograph in the portal.Like it so much. Just read everything you've written and also all the links. Now I understand... I think... except one thing. I am not sure if a lomography camera is a digital one or a film camera. I'm assuming it's a film camera in which case you'd have to scan a photo into a blog.

I'm so with your ideas tho - really that's what a Point and Shoot camera allows us to do. Perhaps I've missed the point and you literally pick up a camera and don't even think about it. Serendipity, eh? Fascinating stuff, Laurie.

This is a beautiful photo Laurie, I like how abstract it is.
This is how I think when I draw or paint, I always try to see the abstract pattern in a scene rather than trying to exactly depict what's in front of me.

i love this shot, and I hear what you are talking about. I had a Lomo camera, could never get it do make decent shots. And developing the film was super expensive. I will stick with my DSLR thank you! Thanks for your comments on my site Laurie (my girlfriend says "she is so pretty!"). Who is Brassai?

Digi cams make it a lot easier - as long as you have time to sort the dross! Too expensive if you're using film and getting it developed!

Re the Aboriginal sculpture - Totem poles as a permanent display are not associated with ABoriginal culture. However, I understand some groups carve and decorate such poles as part of funeral rituals and they are then left to weather and rot (hence there not being many in existence)

This is my favorite low tech video piece Don From Lakewood". Don has made it as far as Denmark and as local as Red Cat theater in downtown. Patrick used a video camera he purchased at TOys are Us to film it. It is the funniest thing I've ever seen.

Ad-libbed lines you say. Did I ever tell you the one about the farmer's daughter ?........has nothing to do with railroad tracks.
Oh, nevermind.

But only you could make a picture of beautiful golden railroad tracks. Railroad tracks look like old bums with knapsacks and you turn them into things of beauty. I am so happy that you find the beauty in everything you see. I can't help but feel like your proud Mom. Attaway to go!

Golden rails? Can the Golden Spike be far behind?

Actually, the original Golden Spike from the completion of the First Transcontinental Railroad at Promontory Summit, Utah in 1869 can be viewed at the museum on the Stanford University campus.

Your commentary reminds me of what I used to tell my students in Life Drawing classes...."SHOOT from the hip." They got it . They loved it.

I have never been to a photography class. I self taught, and that's why I applaud this text. I am very familiar with this just shoot philosophy. To me I wouldn't have got the work I if I had played by the rules. This is a beautiful shot, tones and light and yes creative. You know I am always shouting it's the person behind the camera not the camera. The world's best camera in the wrong hands, boring uninspiring hands, will not capture great shots. It's the human. Photographers are definitely born, like artists. You can teach someone to draw or snap away at a copy, but to create takes instinct and abilitly. Some really fantastic photgraphers are on the cdp and they don't know it.

I have gone on. Having server issues so made the most of this post. Apologies.

Thanks for all the comments today! I must clarify that I did not shoot this with a lomo camera -- but rather with my digital set on auto. I love the idea of playing around with a wacky film camera -- but I think the mood of lomography easily translates to digicams or even cellphone cameras. The idea of happy accidents and unstructured, careless, lighthearted shooting is liberating -- especially in a world where most images we see are altered in some way. The grungy real life images caught this way are inspiring to me. I never would have framed this picture, or studied this particular subject, but just pointing and shooting opened up new vistas -- this one on the ground! I've always liked the idea of just grabbing shots -- and I used to do it with an old Polaroid.

Keith-- thank you for a fantastic website. I suggest everyone check out this photographer's wonderful take on what she calls nonphotography.

PA, it's a blast from my own past that you linked to a Fisher Price video camera project! Back in the early 90s, I and a good friend of mine who went on to become a director did a series of documentary-style short films around Los Angeles using one of those. It recorded on the old standard audio cassette tapes. Now, you can't even find those cameras anywhere except occasionally on Ebay where filmmakers usually get into bidding wars.

Ken, your girlfriend is my new best friend!

Thank you for commenting and communicating, everyone! Til tomorrow.

You aced the abstract beauty of the track here. I love the "just shoot" idea. There are those that carry their cameras around on their hip and just click at random, not even knowing what they will see when they upload the images. Fun concept.

This is really a beautiful study in tone, light and line. Nicely done.

I always learn something new from you.

The design pattern created by the railway tracks and the light is very interesting ... I like this, Laurie.