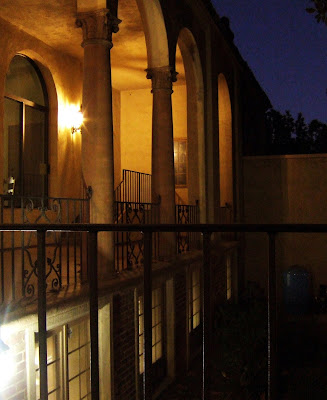 I know I should probably stop prowling around the library at night...

Then again, nah! The South Pasadena Public Library looks entirely too magical with all those shadows and glowing lights. When I was a kid, I used to imagine books coming alive in libraries during the wee small hours when nobody else was around. (This could very well be due to the fact that I often sat up in the middle of the night pouring through a novel under my blanket with a flashlight.) But seriously, can't you see an after hours party where Daisy Buchanan dares to dance with Sal Paradise, and Miss Havisham ties one on with Frederic Henry and Susie the Bear guards the door...?

Like I said ... I should probably stop prowling around the library at night.
Posted by Laurie Allee at 12:54:00 AM

Libraries are wonderful places to linger through for hours. This one looks very tempting!!

I wouldn't be without the local library here. More than the net it's the font of all knowledge for anything Manx. Unfortunately it is not as pretty as yours. I advocate more night prowling. The light and interplay of colours is gorgeous.

I love the visual of all the books coming to life and interacting with one another. Your photo of the library at night is stunning!

You have certainly stirred my imagination and sleepy brain this morning! Thanks for your wonderful blog ...which I now try to start my day with every morning!

I used to really love libraries and your night prowl is something I would have enjoyed.

I wish I could just ship you a load of books - now I have too many.

Hee! I love libraries and was also an avid "under the blanket" reader as a child.

A very nice picture as well. Love the shapes and shadows,

An admirable photo (who still said?) that I would like to see it big on a wall

I'm with Bergson. Blow this one up and frame it. It is spectacular Laurie. Take a bow on this one.

Magical photo. I'll have to go see it - at night.

No no no, don't stop! I love how it looks at night, thanks to your gorgeous photos!

What you do with photos of the library are probably more magical than some of the words on the pages of the books. I always remember your saying that you were frustrated because you could not read them all. Archways are particularly charming and the warm glow makes them even more so. Your night prowling sure does bring beautiful results. Your pictures could all be blown to large proportions and grace the walls of (for instance) a bank for people to enjoy while gazing at their declining balances.

The near rail bisecting the image briefly gives the illusion of a reflection in a dark mirror of water. Looks like books will have enough votes to be the November theme.

Laurie....you left me such a kind comment on my blog and I responded to it on my blog.

But, I wasn't sure if you would see my response....so I thought I would post it here.

Anyway...I hope this isn't distracting to those who visit your blog who want to comment on your post.

I wanted you to know how much your comment meant to me . . .

Gosh Laurie...you've given me so many nice comments and praises. It puts a lump in my throat to read them. You know...I struggle with low self-esteem and you're comments have lifted me.

I have never once thought of myself as a true photographer....since I only take photos with a point & shoot Nikon Coolpix. And digital photography really is so much easier than film (well, at least for me).

I do, however, have a love of photography that I've had since childhood, and I once even dreamed of being a photographer....a professional that perhaps might travel the world photographing wondrous lands. That was my dream.

I also have no formal training or education in the arts or design. My husband, who graduated from photography school, has also told me that I have a good eye and that I have a way with the camera. He has worked as a professional photographer and uses all the pro equipment. He has even offered to teach me how to use his cameras. But, for now, I'm happy with my little Nikons.

So now I frequently photograph my precious children....at home in Knoxville, TN. Really so much better for me than those world travels I once dreamed of.

Thanks, again, Laurie, for your kind comments. You've brightened my day!

Reading between the lines, I think I am reading that books do not come alive at night?

I refuse to believe that.

R U sure that's little south pasa's library? Looks more like my home - my doghouse.

L, another wunderful shot. A bark out to you!

I love the mystery of older buildings at night, when they're closed and locked, with maybe just a light or two on inside. I fantasize about getting inside and exploring the rooms where I'm not supposed to go. Not touching anything or taking anything, just being in a forbidden place. This photo evokes that for me.

Looked Renaissance to me , at first glance. What blues ! What golds! Then there is the illusion of deep space, using Renaissance perspective - which creates a tension with the horizontal rail, reinforcing the flatness of the picture plane. I could go on and on....

I see I am not the only one fond of late night prowling and reading! Thank you for the kind words.

Elaine, I hope next month's City Daily Photo theme is books. I'd love to see the contributions from all over the world.

Dixie (Mom!) -- thank you for always taking me to the library, even when I dragged you there on sunny summer afternoons.

Hope, you keep that dream alive my good woman! I think you're a contemporary Mary Cassatt only your medium is photography rather than painting.

Petrea, did you ever read the young adult book from the 70s where the brother and sister ran away and lived in The Metropolitan Museum of Art? I can't recall the title but it speaks to yours and my longing to explore places after hours.

Shanna, this is HIGH praise coming from you. You, after all, taught me concept of the flatness of the picture plane.

Steve, I don't you dare read between those lines! Books come alive at night. Period. (And there are fairies in the garden, too!)

Great to have you all here. Until tomorrow.

What a delicious title. The single lights - one above in golden glow, and the one below, in a harsher brighter tone. I'm sure there is some deeper meaning to that but it's too early for me to know. HA Terrific division. Like a natural diptych, using the railing of the adjacent balcony. Really beautiful with that trapezoid of blue sky (Impressed? hahaha).

Oh, no you shouldn't. What you SHOULD do is suggest that the library begin holding wine and music evenings. In a building that looks like this at night? there are all kinds of possibilities - a beautiful backdrop against which people could mingle for a variety of reasons.