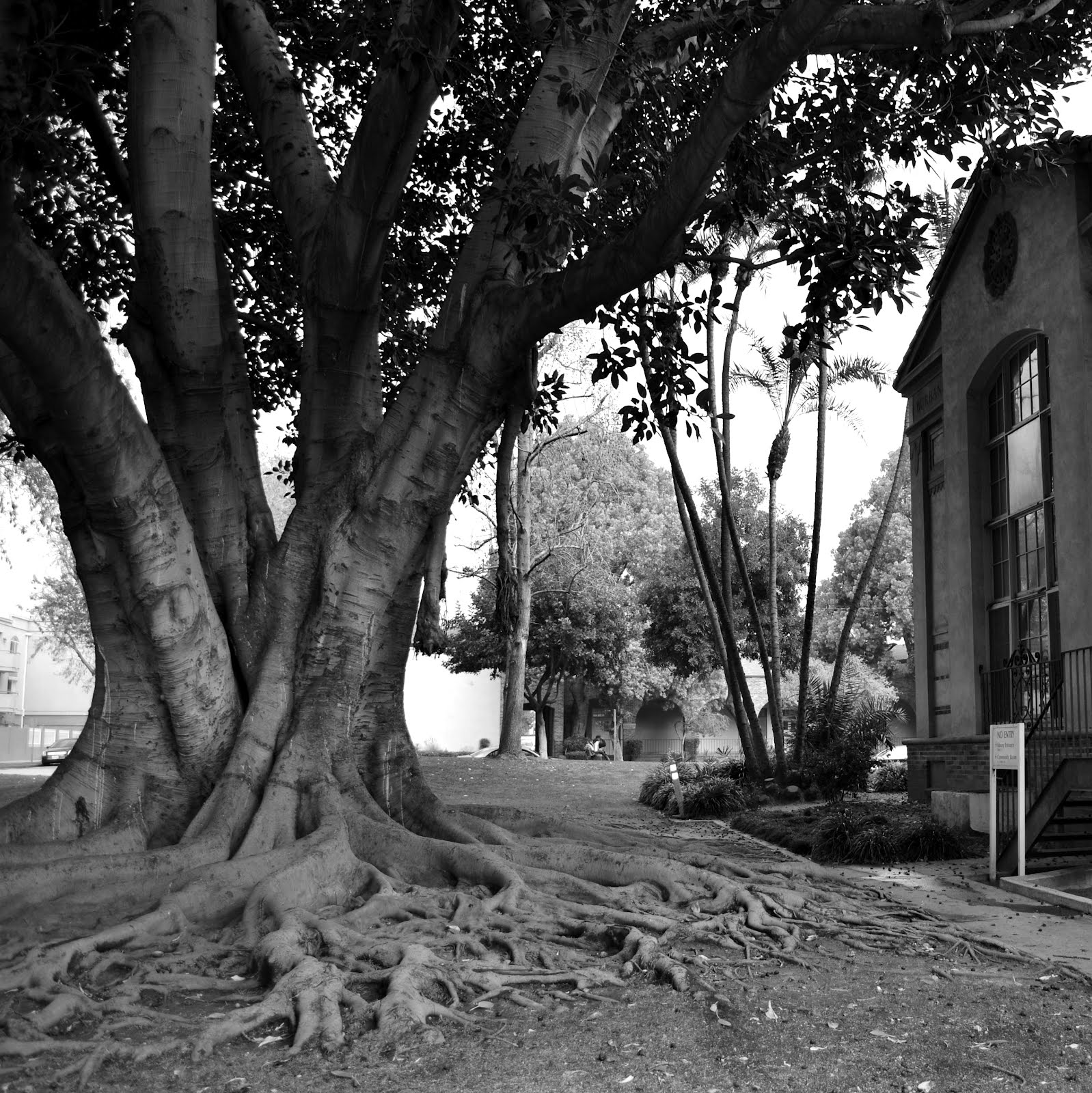 Ever wonder about the history of the majestic Moreton Bay fig tree outside the South Pasadena Public Library? It certainly seems primordial -- like a remnant of our earth's distant past. My daughter  once said that she thought the tree surely must have been around when dinosaurs roamed the earth.

Even though I could imagine generations of pterodactyls making nests in that beautiful tree, I knew it wasn't that ancient. But I was genuinely surprised when it was revealed a few years ago that the tree is barely 100 years old...

For years, nobody knew the story behind the beloved tree. I've heard all kinds of rumors, though. One guy told me it had been a sacred worship spot for the Gabriolino/Tongva tribes. I always liked that idea, and could imagine remnants of pottery resting just underneath those gnarled roots.

But that guy was wrong.

I also heard that it was the tree chosen to gather and declare the incorporation of South Pasadena as an independent city. I liked that story, too. Can't you just see a bunch of Victorians celebrating their new town at the dawn of the 20th Century beneath those branches?

Nope. That story is completely wrong, too.

As it turns out, lifetime South Pasadena resident Bill Kloezeman cleared up the mystery a few years ago. The tree was planted in 1930 by Bill's father Willem Garret Andries Kloezeman (also known as Bill) when South Pasadena's Carnegie Library was being moved from Diamond Street to the center of town. City Librarian Steve Fjeldsted wrote about it on the library website:

"Many years ago while driving around town, the elder Bill Kloezeman used to tell his son about all the work he’d done around town, including his planting of the Moreton Bay Fig. Another well-known project of Kloezeman was the annual placement of a lighted star on the top of the water storage tower atop Bilicke Hill in the Altos de Monterey.

At the time of the planting the Moreton Bay Fig was a young potted tree and about 6 inches in diameter. When he planted it, the senior Kloezeman was working for the City’s Street Department. Bill (Sr.) worked for the City of South Pasadena from 1926 until he retired in 1972, a remarkable stretch of more than 45 years. While working for the Street Department in the 20’s and 30’s, Kloezeman planted many other large trees in town that are still around as well. Later he also worked for the Fire Department in the 40’s and the Water Department in the 50’s, 60’s, and early 70’s, until he retired as a Water Service Foreman on January 15, 1972. Willem “Bill” Kloezeman passed away on September 7, 1981."

It might not have a history of pterodactyls, tribal rituals or city incorporation, but who cares? At merely 100 years young, that just means our beautiful fig tree will be around even longer for us to make more memories, and maybe even come up with a few more mysterious stories about it.

Want to leave a comment?  Head over to the Glimpses of South Pasadena Community Forum and start a conversation!
Posted by Laurie Allee at 3:29:00 PM